Showing posts from July, 2019
Show all

July 20, 2019
Djam NYC is a weekly world music (actually, middle Eastern music) event at The Engine Room in NYC. It features Baharat, a Brooklyn-based band, and Bellyqueen, a bellydance company.
Baharat is a four-musician band, and their marvelous Arabic music includes tones and rhythms not found in western music. It centers on Mr. Burdi’s oud, a lovely pear-shaped 12-string instrument with ancient origins, like a lute, that epitomizes the dazzling sound of middle Eastern music. Mr. Burdi told me that it’s more difficult to play than the guitar, and it’s certainly worth the effort. Its glittering timbre, although somewhat acerbic compared to a guitar, is hypnotic.
On percussion, Adam Maalouf plays a riq (a sort of tambourine), a cymbal with holes in it that alter its sound, and a frame drum called a droombek. They give the music a wide rhythmic range. Sometimes he hits the wooden edge of the drum with is hand for even more variety.
The violin, of course, is not an authentic middle Eastern instrument, …
Read more

A Doll's House: A New Opera 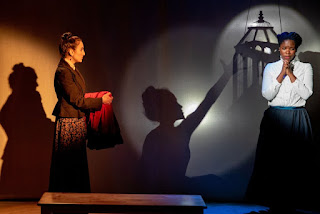 photo by Justin McCallum
Making Ibsen’s play A Doll’s House into an opera is an intriguing project. The play is melodramatic - Ibsen had a long way to go before he freed himself of that weakness - and the emotions and giant and varied, sometimes repressed, sometimes explosive.
You’ll recall that this scandalous play relates the story of how Nora sacrifices herself to save her husband, Torvald, through a minor crime, and is blackmailed by Krogstad. To make a long and convoluted plot short, Torvald finds out, and instead of himself taking blame for the crime, as the naive Nora expected, blows up in a fit of abusive recrimination. Fortunately, Nora’s BFF, Mrs. Linde, convinces Krogstad to forget the whole damn thing, and everything would be fine except that Nora’s going to have no more of this arrangement. She storms out, abandoning her children, famously slamming the door after her. Oh, and Dr. Rank is involved too, adding more to symbolism than to plot.
This month The Corkscrew Theater F…
Read more 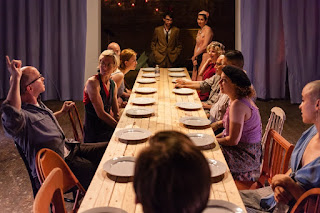 The future of the theater lies in immersive, site-specific work. The Peculiar Works Project gave us a terrific example of this recently, off-off-Broadway, called Afterparty: The Rothko Studio. It was presented at 22 Bowery. The address is important because the building has housed many artists’ studios - most notably that of Mark Rothko.
We’re an audience of about 25. We’re introduced to the space in the street-level galleries hung with work of contemporary artists, and another with sort of secular altars and a man lying under a small pyramid wearing headphones. We’re in classic New York Bohemia. Then we’re welcomed by an actress in a wild headpiece - I believe the program refers to her as “The Muse” - and ushered into the next room, where we’re entertained by dancers, starting with biomechanics and progressing to interpretive dance.
A host greets us: “Welcome to the Bunker. … This is John’s night. … We wanted to do something special to honor his first show!” Such is the conceit of the e…
Read more
More posts