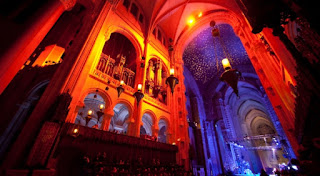 Paul Winter’s 40th Annual Winter Solstice Celebration opened with Paul Winter’s soprano saxophone heard in darkness. Then he was spotlit in his white jacket. It was the start of a marvelous one-night-only three-hour concert at St. John the Divine’s Cathedral, the largest cathedral in the world. The venue is monumental and the jazz concert matched its grandness.

From where I sat, I could see the seven sanctuary lamps in the apse burning behind the players. Audience on the other side of the players saw the entrance to the cathedral dimly lit. There was an organ by the raised playing area, and on scaffolding on the area’s sides were the other musicians, The Paul Winter Consort. There was a bass, a euphonium, an alto sax, a cello, keys, drums and more drums. And gongs - three on each side.

The tone of the pieces ranged from fragile to ecstatic, some of the best moments coming from Mr. Winter’s sax solos and a lovely cello solo by Eugene Friesen. Friesen not only bows - he strums and plucks the cello. Clark Goering had a tasty solo on the euphonium - a brass instrument like the tuba or the French horn.

Noel Paul Stookey sang, accompanying himself on the guitar. It’s extraordinary what good shape his voice is in! His first album with the trio Peter, Paul and Mary was recorded in 1962, and he still has the baritone of a young man. He sang his most popular composition, The Wedding Song (There is Love), with simplicity and grace, as well as Silent Night.

Teresa Thomason, a wonderful gospel singer, was superb singing How can I keep from Singing. Another song, however, sounded rather harsh if you were sitting near the speakers. The huge church had only two speakers on my side of the players, so that your auditory experience varied greatly depending on where you sat. Mr. Winter told me that he preferred to play without amplification, but it was necessary with a large audience.

Forces of Nature Dance Theater gave the evening some exciting visuals, with sometimes nine dancers, sometimes 11, sometimes more, including young girls. They were impeccable. It was joyous when the Consort accompanied them. However, when they were accompanied only by percussion, the troupe’s drums began forte and stayed that way. Percussion needs to begin reservedly and grow.

There were some lovely costumes, such as the white dresses of the dancers. Other costumes needed to be reconsidered.

Happily, Mr. Winter’s delicious, mysterious sax was never far away. He took the lead on Joni Mitchell’s Both Sides Now in one of the evening’s best moments.

The concert ended with the audience howling in the new year and singing Olde Lang Syne. What a joy the concert was - technically unimpeachable (where did that word come from?) and life-affirming! We’ll look forward to another 40 winter solstice celebrations with St. John’s grand artist-in-residence, Paul Winter.

photo: WMI The pipa ( pee -pah) is an ancient Chinese instrument similar to a lute, with four strings, played almost vertically. Pear-shaped, it has four tuning pegs and about 30 frets, and modern ones have a small sound hole under the bridge. Its sound is haunting, like the sound of nature. Its origins are debated, but it evolved as a combination of many instruments, the earliest a hand mallet drum to which animal gut strings were added. We first hear of it in documents of the Eastern Han Dynasty (25 to 220 AD). Its master, Ruan Xian, lived in the fifth century. It was most important in the Tang Dynasty (618 to 907) and repopularized in the Middle Ages, during the Ming Dynasty.  And it’s still played today - most notably in the hands of Zhou Yi, who’s been winning awards since childhood for her virtuosity. On November 20 she gave a marvelous concert at The China Institute in New York, Discover the Pipa , produced by The World Music Institute. Her first piece was sim
Read more