Showing posts from March, 2014
Show all

Tosca and the Two Downstairs 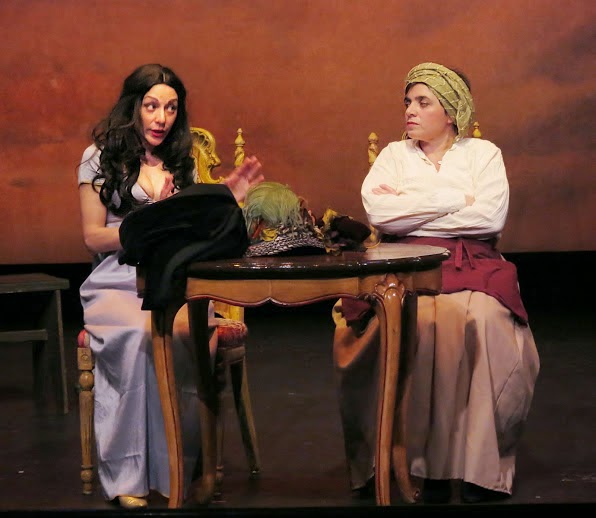 Tosca and the Two Downstairs by Franca Valeri directed by Laura Caparrotti with Laura Caparrotti Marta Mondelli from Kairos Italy Theater and Dicapo Opera presented in Italian with English supertitles Spoiler alert ! Tosca and the Two Downstairs is an enormously creative piece from the Kairos Italy Theater, written by Franca Valeri. This two-character drama is set during the action of Tosca ; it’s a spoken piece, not sung, the action of which takes place while the second act of the opera is going on offstage. After an amusing little opening scene, we meet Emilia at the Palazzo Farnese, where she is porter. The play’s exposition consists of her describing the people around her (who are the characters from the opera) to her offstage husband. The two are in the service of Scarpia (the villain of the opera), to whom Emilia is devoted. Iride enters, wife to Sciarrone (he’s straight from the opera as well). Scarpia is chief of police and Sciarrone, also an unsavory c
Read more

March 12, 2014
Capt. Smith Goes to the Ukraine from the Yara Arts Group At La MaMa Directed by Virlana Tkacz Bob Holman Susan Hwang Julian Kytasty The story from the early 1600’s of John Smith and the native American woman Pocahontas is iconic Americana. The native chief sentences him to execution; Pocahontas intercedes and saves him. Smith was quite the adventurer. He also seems to have been quite taken with himself. He recorded his life in the first autobiography in English, The True Travels, Adventures and Observations of Captain John Smith, in Europe, Asia, Africa and America from Anno Domini 1593 to 1629 . Before Smith embarked for Virginia – who would have guessed? – he fought the Ottoman Turks and was enslaved. He was taken across the Black Sea to his owner’s mistress, to escape to Ukraine. Capt. John Smith Goes to the Ukraine , from the Yara Arts Group, is based on the account of this adventure his The True Travels book, and some of its passages are quoted verbatim. For
Read more

March 05, 2014
A Doll’s House by Henrik Ibsen from The Young Vic, London At The Brooklyn Academy of Music Directed by Carrie Cracknell February 2014 There’s no play more iconic the Ibsen’s A Doll’s House . It wasn’t the first modern drama, but it announced modern drama with unprecedented volume and insistence. It confronted Europe with theater as revolutionary. If Ibsen had written nothing but Doll’s House , his position theatrical paterfamilias (aka “T he Father of Modern Drama”) would still be assured. Doll’s House concerns a monumental simp – Nora –   to whom her husband, Torvald, condescends to an epic degree. What he doesn’t know is that years earlier she forged her father’s signature to get a loan that would help him (he doesn’t even know about the loan). She’s been paying it back through scrimping and saving on her own allowance. Today the lender shows up to blackmail her. She believes that when her husband learns what’s happened he’ll take responsibility for it – but instea
Read more
More posts