Showing posts from March, 2019
Show all

March 22, 2019
La MaMa has presented a marvelous Chinese Fringe Theater Festival, consisting of three productions from China. The first, The Dictionary of Soul , is produced by The Physical Guerrillas and directed by Li Ning, and it’s eerie. The set consists of metal shelving, six shelves high. 10 actors in drab uniforms enter, and for more than an hour and a half they present us with an industrial dystopia, wordlessly. They work resignedly at their jobs scrubbing bricks - the sound is spooky - and after a while some of the become machines themselves. Someone rebels briefly, but goes back to work. They sleep on the shelves and the superintendent throws bricks at them to wake them. In their silence, each one is alone working at his pointless task. The second half of the play, however, is redemptive. It’s more abstract than the first, with ritualistic movement including a death and a cleansing ceremony of pouring milk on the body. Finally the cast place the bricks in a neat pile and one by one - v
Read more 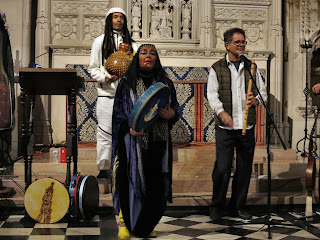 photo by Jonathan Slaff The Black Madonna is the Goddess, also interpreted as Earth Mother or the Christin Madonna. Her worship dates from pre-Christian rituals. Alessandra Belloni has studied the current rituals in Italy and created a wonderful concert of music and dance presented by The Cathedral of St. John the Divine in a side chapel (a side chapel in this huge, magnificent building is the size of a church somewhere else). From the opening song, a traditional chant for The Madonna of Seminara from Calabria which Ms. Belloni sings accompanied only by a flute, to the last, a song that she wrote herself in praise of the moon goddess, we find an astonishing variety of emotion, tone and rhythm. There’s a healing chant, ritual drumming, a medieval prayer - even a chant to the Orisha goddess of Love and the Sea from the Afro-Brazilian Yoruba tradition. Ms. Belloni takes the lead vocals. Her middle and upper registers are rich and expressive. At its best, her upper register
Read more
More posts