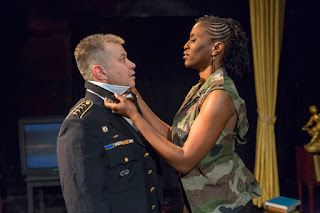 For those who haven’t run across Jean Genet’s French play The Balcony in a college drama class: it’s set in a brothel. Its opening presents a series of scenes between clients and employees. They’re highly eroticized charades of social power: a gentleman masquarades a priest, a woman a judge, another man a general. The hired professionals play along to reinforce the socio-sexual role-playing, and there’s always a dominant/submissive element of S&M. There’s a stress on the iconic costumes the clientele don.
Meanwhile, there’s a revolution going on in the street. The bordello is aligned with monarchy. When the ancien régime – and its authority figures – fall, the aforesaid johns put on their play clothes and, in the script’s climactic scene, pose for a photo to perpetuate the monarchy’s power. The impression that these people (priest, judge, general) exist is enough to suppress rebellion. In fact, Madame Irma, the Madame of the establishment and the play’s focus, impersonates the queen, who may be dead (but for this playwright, it doesn’t matter if she’s really dead or alive).

It’s happily not my brief to analyze Genet’s uncommonly complex and abstruse text.

In the The Horizon Theatre Rep’s recent OOB production, Director Rafael de Mussa has eschewed the theatricality that the play’s productions are noted for (mirrors, oversized costumes) and expressed it in human terms. There’s a television on stage channeling footage of real riots, and the sex scenes stress the carnal, not the political.

De Mussa’s vision is well executed. He’s grappled with this bête noir of the modern canon quite well, if with limited success. The Balcony is, after all, le Tour de France of stage direction. At times it seems to float into unclear surrealism. At other times it’s simply unclear.

One problem is the highly stylized, deliberately obscure quality of Genet’s dialogue. Sometimes a line seems interchangeable among characters, as if its meaning were more important than its expression of character and action. The play is la philosophie first, le drame second (in contrast with a playwright like Checkhov, whose first concern is with les gens).

To make matters worse, no one educates us to lines like “When life departs, the hens cling to a sheet”. We’re not told that “hen” (poule in French), refers to a prostitute.

The principle actors serve well, led by a bravura Maria Wolf in the complex role of Madame Irma. She’s a businesswoman, and if she strikes a pose it’s because she’s in the business of posing. Carlo Giuliano gesticulates so extremely that he nearly leaves acting behind, but he does it so well that we believe it. Rafael de Mussa (our director) gives a very solid performance in the pivotal role of Chief of Police, grounded and subtle. Jon Okabayashi gives the most interesting performance. As a wimp with military fantasies, he seems to be struggling to understand himself and the situation. We see him fall in and out of moments of clarity.

The secondary players don’t always fare so well. De Mussa has cast an actress unsuited for the role of Chantal, the prostitute who’s joined the rebellion. Chantal is meant to be an opaque icon of glory, and the actress - not a bad actress - is simply miscast. And while the role itself isn’t major, this is a serious weakness. The character adds complexity the theme of iconography by applying the principle to the resistance. There’s a line: “In every revolution there's the glorified whore who sings an anthem…”

Costume and set are quite well done by Amanda Shafran and Joseph Kremer, respectively.
And so the show works sometimes well, sometimes less well. Whatever its faults, we’re grateful for a company that takes on such a work like this. I'll look for them next season.