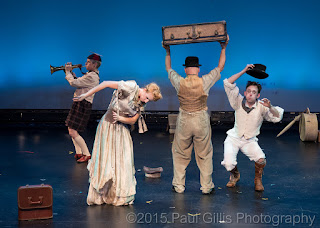 What we do without smart clown shows? “Smart clown show” describes Happenstance Theater’s show Brouhaha, appearing Off-off-Broadway at The Theater for the New City. The loose premise is that the six characters expect the world to end imminently (the script doesn’t explain why and we don’t care). There are a couple of off-stage sort-of explosions that throw them on the floor, and then this brief exchange:
“Was that it?”
“Apparently not.”

And then they resume gayly throwing themselves at life. They dance (it’s lovely with their accordion and their umbrella) and play a game tossing their hats around and jockey for position in lines for nothing at all. Even better, they talk to us. “Hello. This is a safe place,” is the first line. “Ladies and gentlemen, the world is ending tonight,” they announce later without a trace of regret. The line “Imagine the bombs exploding outside are far away,” gives the script’s only real suggestion of given circumstances.

The house lights are on and we’re often a part of the show as we sit there. “If you’re here, raise your hand,” they tell us, although they obviously can see us perfectly well. We talk about what we’d like for our last meal and the characters are giddy with approval. “In the end we are all alone,” they sing, and we all sing along on the riff “all alone”, although we’re not alone at all. Finally they move on, not having been annihilated at all, presumably to another safe place.

Hardly more than an hour long, Brouhaha is a slight piece, and it’s delightful. We quickly grow to like these characters. Each is individuated. Part of the fun is in Sabrina Mandell’s whimsical costumes of no particular period. And one actor has a red nose, just enough to indicate a clown show.

Brouhaha is very influenced by Waiting for Godot. Of course, it doesn’t approach the Beckett play in terms of content. Its premise - the end of the world - doesn’t inform every moment of the play; it’s merely stated, not extended. But many productions of Godot would benefit from this company’s masterful technique.