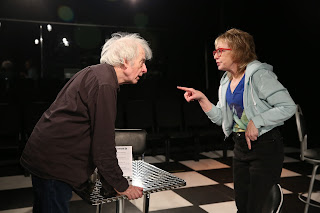 A play by June Daniel White called Delta in the Sky with Diamonds or Maybe Not is playing at Theatre 54 at Shetler Studios, produced Off-off-Broadway by Boogla Nights Productions. It concerns a woman, Delta, recently deceased, who meets God and finds that for some inexplicable reason he has a plan to use her to save the world. It seems that she must get Lyle, a living former rock star, and Hollywood, a living waitress, together as partners. The future of the world depends on it. It’s not clear why this should be the case.

At any rate, Delta and God show up at Hollywood’s diner in Wabash, Indiana, with Lyle and Hollywood. It’s neat that they talk to one another but can’t be seen or heard by the living for a while. Then, to Hollywood’s bewilderment, Delta appears in the living world with her and Lyle.

There’s a second concern in the script: Delta’s boyfriend, whom she left standing at the church on their wedding day. She works to convince God to let her go back to Earth to deal with him. He lets her go, but only after saying “Sending you back is complicated.” This God is spineless, barely an authority. In fact, he doesn’t seem to realize that he’s already sent her back, to Wabash.

Trivializing God is a staple of bad plays. Just make him human and petty (and in this play, God actually says “I’m God. I’m just human.”), and that’s apparently considered enough of a device to pass for comedy. In this play God is weak, easily manipulated, and not even funny. “I don’t know what’s happening in my world,” he says. And we don’t care what’s happening in this play because the script doesn’t make us care. The writing is sketchy; it glosses over dramatic action. There’s no dramatic tension. Worse, it gets sentimental when Delta shows up at her ex-boyfriend’s diner and dances with him.

The playwright herself plays Delta. This piece of casting by itself should be a red flag. She hesitates when she starts to speak, and repeats words, and stammers so much, that she seems repeatedly to forget her lines, which isn’t likely to be the case. The problem seems to be a misbegotten acting technique. We don’t for a moment believe this tacky character, and we don’t care what happens to her. Only once, when she recounts a ridiculous childhood trauma, oddly enough, is Ms. White believable. Delta has also been raped, but neither the character nor the playwright cares much about it.

God is played by the formidable and accomplished Austin Pendleton. It’s a mystery why he agreed to take on the role. His physical life is marvelous. He gesticulates and runs his hands through his hair and claps. In another actor this sort of abandon would be false and embarrassing, but Mr. Pendleton so adept, and his physicalization is so emotionally grounded, that it’s fascinating. He does not, however, convince us that his God has any need to meet. His dumb lines fall flat, as when he says that Mother Theresa isn’t in heaven because “she refuses to take the dishtowel off her head.” Ugh. No actor could save this play.

The supporting cast is serviceable, but only Bob D’Heane, as the aging rock star, is notable.

The show’s director, Michael Padden, does the best he can considering the material. He keeps everything moving along at a nice clip, and he’s made the inspired choice of having Mr. Pendleton sit in the audience at times and watch the action on stage. He’s staged in the round; it makes for a nice intimacy, but doesn’t salvage the play.

I saw Delta in the Sky with Diamonds on the second evening of previews. Perhaps the following night, when it opened, Mr. Padden and Ms. White made some miraculous adjustments.