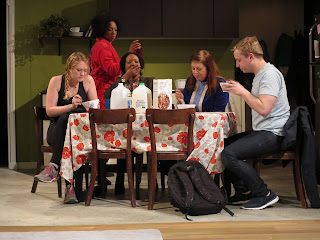 Naturalism isn’t my favorite style, but with theaters trying to outdo each other to be avant-garde, it’s refreshing to find a conventional, naturalistic production of a new script. I speak of Squeaky Bicycle Productions’ production of Or Current Resident, by Joan Bigwood, presented at The Theater for the New City. It’s squarely in the tradition of the American drama’s theme of family. From Eugene O’Neill, through Tennessee Williams and Edward Albee, to Sam Shepard, American playwrights have been obsessed with family.

And naturalism this is, with a set with walls, presenting the common room - a combination living room and kitchen - of a lower middle class home, very nicely designed by Meg McGuin.

The family in this play is the Finch’s. Mimi, the grandmother, lives with her two daughters and twin grandchildren in “a small and crowded space”. Her son, Ted, comes to live with them after a lengthy prison term. Granddad’s interred in the back yard, present but absent.

The plot, such a it is, concerns Ted’s re-assimilation into the family, the daughter’s online search for romance, and the girl twin’s obsession with an off-stage boy. In fact, the playwright has learned from Chekhov (particularly from Three Sisters) to give the play multiple plots. The threatened eviction of the family from the home isn’t exactly a plot element; it’s more of a given circumstance. “What do I always say? We are Finch’s and Finch’s adapt,” Mimi says.

What’s most striking about the script is Ms. Bigwood’s naturalistic dialogue. She’s very skilled at delayed exposition. For the first half of the show, we spend nearly all our concentration extracting information from the dialogue. Indeed, we don’t learn everything we need to know about the family until the end of the play.

What’s more, the playwright imbeds the most significant lines in the conversation with marvelous subtlety. “We can’t decide our own fate. Fate will do it for us,” Mimi says, and Lydia Gladstone delivers the line so naturally that it doesn’t seem intrusive or pretentious.

Ms. Bigwood also touches on another typically American theme, the use of lies to make life tolerable. Ted makes the mistake of telling the twins a family secret and throws them into turmoil. “Is it called a lie when it’s meant to do good?” he says in response to their resentment.

Most of the cast gives us very good work here, particularly Lydia Gladstone in the role of Mimi. “Good Morning, morning glory,” she chirps with forced cheerfulness, the personification of motherhood. Michael Vitaly Sazonov is also outstanding as Ted; he plays the felon with sensitivity and reserve. Curry Whitmire as the boy twin, Krystle N. Adams as his mother and Bettina Goolsby as his aunt also do well. The young actress playing the female twin, unfortunately, is allowed to overdo the hostility and petulance.

Brandi Varnell’s direction is smooth and subtle, seemingly effortless. Her busy blocking has the family jostling around in their cramped apartment. She never dwells and never rushes, and she’s very ably led her cast as an ensemble.

However, there are some problems with the production. First of all, the actors playing the twins are too old to play 16-year-olds. They scarcely look ten years younger than their mother. When the boy reaches manhood - he delivers the last line of the play, “I promise you, I’m on this” - we’re not impressed because we’ve always thought of him as a man. The problem makes it particularly difficult to identify who the people are in this family, on top of the challenge posed by Ms. Bigwood’s dialogue. That this is a common problem - finding actors who can play teenagers - makes it no less annoying.

And some of the actors rush their lines, speaking without deliberacy, swallowing their vowels and gliding over the consonants. They’ve neglected to balance the needs of naturalism with the needs of the listener. The younger actors would do well to take a lesson from their elder, Ms. Gladstone, whose delivery is simultaneously spontaneous and studied.

Ms.Bigwood has peppered the dialogue with humor that saves it from melodrama. Nonetheless, all this unhappiness gets rather oppressive toward the end, what with the neurotic personalities and the vicissitudes of fate. And she gets bogged down in her dialogue in some passages, neglecting dramatic action.

Nonetheless, Squeaky Bicycle has given us a very fine show in Or Current Resident, understated and complex. Good work!