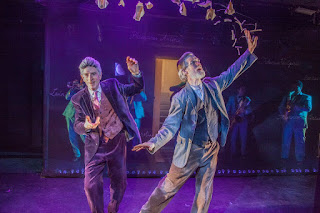 The pre-show of Fusiform Gyrus consists of a grey-haired man at a desk, with his head lowered. There’s a black back wall, which turns out to be a scrim, with some scientific names for beasts written on it - thamnophis sirtalis, phengaris arion… Fusiform Gyrus, the program tells us, is “a region in the brain that lights up with activity during brain imaging when people describe, and give names to living things.”

At the show start, a second grey-haired man enters, and the two men, equally tall, laugh for no reason. It’s a fitting opening for Talking Band's good-natured, inscrutable production of this script by Ellen Maddow.

The company consist of the two actors and five musicians (trombone, tuba, trumpet and two saxophones). From time to time the brass band plays, merrily at first and cacophonously or whisperingly later in the show. Late in the show there are little lights round the bells of the instruments.

There’s no plot; these aren’t dramatic characters. They’re more like intellectual hallucinations. One is an “alpha taxonomist”, the other an entomologist who’s “decided to live his life inside a Russian novel.” They talk all the time, sometimes to one another, sometimes to us, and they watch a video of two people having a conversation in a breakfast nook. But the characters in the video can’t be heard, and the on-stage characters speak their words. They also sort of sing and dance a bit.

They don’t talk about anything in particular for very long. Sometimes they tell stories, and they talk about the woman who appears in the video. But the fact of their talking, their very conviviality, is more important that anything they might talk about. There’s a bit of dramatic action when Dr. Decker (the taxonomist) talks to us about Mr. Grey (the entomologist-turned-man-of-letters) and Mr. Grey storms off in a huff. “This is a moment without a name,” Dr. Decker says. But the rift doesn’t last long and Mr. Grey returns. They tell us the key (the key to what?) is in the bell of the slide trombone, but when Dr. Decker reaches into it he pulls out a flash drive.

This is very Carrollian nonsense, and it’s entertaining. But unlike the Alice stories, it’s opaque and abstruse. If it means anything, Ms. Maddow doesn’t let us in on the secret.

The show is buoyed up by the talents of its two actors, Tom Nelis and Paul Zimet, who animate this dramatic void with unflagging emotional and physical life. They’re matching wits, recognizable as the smart academics we’ve all known. Ellie Heyman’s direction keeps everything moving along allegretto and precisely controlled.

In its stasis, its disdain of narrative, its loopy characters, Fusiform Gyrus is influenced by - not to say imitative of - the work of Richard Foreman. Even the band reminds us of the prancing gnomes and musical loops that some of his work had. However, it fails to leave us with the inexplicably refreshed feeling Mr. Foreman’s work has. He called his own work “a complex and dazzling object observable under glass”. Fusiform Gyrus fails to dazzle, partly because it’s not particularly complex. Ms. Maddow, like all of us, hasn’t guessed Mr. Foreman’s secret.

Fusiform Gyrus runs only about 70 minutes, and its brevity is part of its wit; we couldn’t handle any more. “Our brains are unreliable,” Mr. Grey has told us, so perhaps it’s best not to try to understand the play’s mysteries.