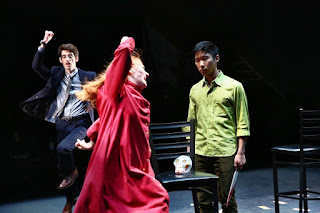 Distant Observer: Tokyo/New York Correspondence, presented by La MaMa at La Mama, was written by two playwrights, one in New York and one in Tokyo. The segments of the final script alternate between the work of the two of them. The play, then, is modeled after a renga, a Japanese verse form in which multiple writers collaborate.

The creative method is interesting, but Distant Observer reflects nothing of this dyad process. It simply makes no difference, as we can’t discriminate between the style of the two writers, at least in translation.

The two playwrights in question are Takeshi Kawamura and John Jesurun, and the play is strange even by Off-off-Broadway standards. Its five actors play characters who are essentially amorphous. Although one is called “Mary” at one point, the only other names assigned are “A” and “B”. One character even says “I’m not even a character. I’m just some kind of idea floating around.” and “I think we have become each other.”

The story, such as it is, concerns a man who’s confessed to a murder, although the event may have been a suicide. The victim’s sister, indeed, offers him money when he gets out of prison, in gratitude. “He hid my sister’s shame,” she says of him.

Reality itself is amorphous in this play. Even the ex-offender can’t be trusted in monologue; he confesses to us at the play’s opening: “I was 19 when I killed her. … I don’t even know why I did it. I was crazy and I love with that girl. … I can never make the done undone.” However, the victim’s sister says that the victim bought the poison and stated her suicidal plan herself. The convict seems to be trying to convince himself.

Mid-play the setting shifts to a scene that represents Aokigahara, the Japanese forest where people go to commit suicide. “I can’t stand the stupid faces of hanging corpses,” one character says. Then the killer (the not-killer?) confesses to burning the forest down to stop the suicides - but perhaps he hasn’t. “There is no fire as far as we know,” a character says during a discussion of the fire.

But the dominant characteristic of the production is not plot nor theme nor dialogue but the delivery of the lines. Every moment, without exception, gives us rat-tat-tat readings, as if the actors were machine guns aimed at each other in trench warfare. Emotions are indicated, but they have no real effect on the characters, and certainly not on us. Paradoxically, the effect is to create an intense involvement in the audience. We pay rapt attention to the performers throughout the short piece. It’s riveting. We may not understand, but we don’t have the time to be bored.

No director is credited. The entire package seems to be the concept of Messrs. Kawamura and Jesurun. The cast - Anastasia Olowin; Kotoba Dan; Claire Buckingham; Kyle Griffiths; Samuel Im - are absolutely faultless. The acting has the sharply defined veneer of Arita ware.

The production uses lovely video and creative staging incidental to its dazzling concept. Distant Observer is fascinating work that only glows more brightly in memory.