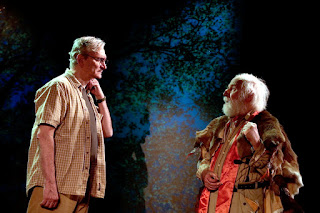 Karen Malpede’s play Extreme Whether, presented by Theater Three Collaborative at La MaMa, describes itself as “a Cli-Fi drama.” Its concern is climate change, and it explores the issue through a family drama. John is a climate scientist, Rebecca West his live-in colleague. Living with them are his 13-year-old daughter and an older gentleman called Uncle. John’s sister, Jeanne, and her husband, Frank, are visitors. The home is on protected land that John and Jeanne have inherited.

Needless to say, the characters of the climate scientists and the resistance they encounter refer to actual people and events. The character of John is particularly based on Dr. James Hansen, who warned Congress against global warming in 1988.

Ms. Malpede manages both to create both a moving family drama and to make a social statement in the vein of Ibsen. John and Rebecca, of course, are trying to save the world, and Jeanne and Frank are their avaricious foils. The play’s action is engrossing and its characters vivid, well drawn. It uses personal characteristics - sibling rivalry, lust, greed - as elements of a dramatic social metaphor. But the structure suffers by a climactic event for which we are totally unprepared.

Sometimes the characters philosophize with an lyrical artificial speech that suggests Chekhov’s stylized naturalism. Jeanne describes a moment “as if our whole lives had slipped past” Indeed, when they speak of the degradation of their land, we might be watching The Cherry Orchard. “This part of the land will never be touched - I can promise you that,” Jeanne says ominously.

Sometimes, however, the artificiality is intrusive - as in “You will be working and I shall, too, through the night.” Moreover, sometimes exposition intrudes on the characters speech and they explain themselves for our sake.

But it’s Ibsen, not Chekhov, who stands behind this problem play designed in his style. Ibsen is never far away from Extreme Whether. As in Ibsen’s plays, the script has little concern for life beyond its central idea. And as in Ibsen’s plays, the past returns to haunt the characters. What’s more, there are several specific references to Rosmersholm. The most obvious is the central character’s name: Rebecca West is also the central character in Rosmersholm. There are other references to Ibsen’s play as well, including John’s name corresponding to Ibsen’s “Johannes”  and a passing reference to jumping of a bridge. Even the costume designers, Sally Ann Parsons and Carisa Kelly, allude to Ibsen in Rebecca’s frumpy dress, an reference to the dressing gown that Ibsen’s Rebecca scandalously wears in the presence of a man not her husband in Rosmersholm.

Ms. Malpede also directs. As playwright and director, she never dwells and never rushes. She is never sentimental, even at a frog’s funeral. In the show’s most lyrical moment, her actors lie on the ground in the form of a star, enjoying the stars above. However, she’s directed her actors to speak in a tone that sometimes falls into the declamatory and inhibits intimacy. And it’s very odd that John’s daughter remains apparently 13-years-old even after eight years have passed.

The cast is uniformly first-rate. The best performance belongs to Khris Lewin as Jeanne’s husband; he manages to be at once hateful and believable. Rocco Sisto as John and Clea Straus Rivera as Rebecca are very good, despite their overstressing their lines. George Bartenieff as Uncle is irresistible, recognizable without being a familiar, reminding us of Firs in The Cherry Orchard. Emma Rose Kraus plays the ageless child and Dee Pelletier plays Jeanne Jeanne, both giving very satisfying performances.

Whatever the production’s weaknesses, Ms, Malpede and the company are to be congratulated. Extreme Whether succeeds in dramatizing an issue without being preachy. John sums up our predicament when he says “What can we do but to continue to describe our demise?” But Ms. Malpede gives us hope in the play’s final segment, the Epilogue, and looks to the future.