It Came from Beyond

April 25, 2018
What we do without science fiction? It keeps our imagination sharp even when it’s not on-the-mark predictive. And we can see the imaginative value even in the sci-fi of the past. 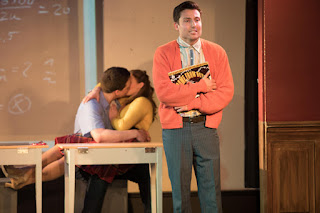 It Came from Beyond is a musical frolic through the sci-fi of the 1950’s, produced by John Lant, Cornell Christian and ICFB Productions, at St. Luke’s Theater. It’s not so much a send-up as an comic musical interpretation, with a book by Cornell Christianson and with music and lyrics by Stephen M. Schwartz and Norman E. Thalheimer. It presents a story about a high school student reading a sci-fi comic book paralleled by a story about a military scientist detecting an interplanetary invasion. So the writer has it both ways, and he does a great job of twining the two plot lines together. Actors double as students and military staff: the teen-age nerd parallels the military professor, the school bully parallels the alien in the military base, etc… It’s really cool!

Jim Blanchette’s direction has humor without being too silly. Most of the cast does a first-rate job: Clint Hromsco as the nerd and the Professor; David Doumeng as the Teacher and the Colonel; Fielding Kaitlyn Baldwin as the Teacher’s Aide and the Colonel’s lovelorn Private. The actor playing the bully/alien is unfortunately miscast.

Mr. Christianson is well aware of the way 50’s sci-fi played on 50’s McCarthyism, and the theme gives the book some of its best lines. “We’ve got spies on this base - commie spies. They all look like Stalin,” the Colonel says. When the extra-terrestrials invade, he shouts “That’s no asteroid… It’s a commie sneak attack!” and “Don’t fire ’til you see the reds of their eyes.”

The song lyrics, as well, reflect the specific delights of 50’s culture. Some of it is fluff: “Annette Funicello turns me into jello - She’s sweet as an Abadaba.” And some is more clever, celebrating 50’s blandness: “I just wanna thank creature that made me blank,” the alien sings. And we find 50’s paranoia in the song “Are you one of them?”

There’s a bit of confusion in the symbolism (who’s blank, the people or the aliens?). And the company has made the mistake of using recorded accompaniment, (other musicals have used keyboards in that space). People don’t go to the theater to hear a recording.

It Came from Beyond is hardly ground-breaking. We enjoy its very predictability.   But it’s great fun!