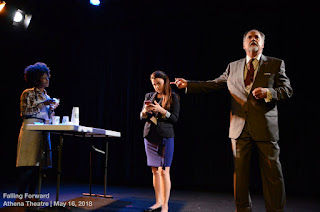 Falling Forward: An evening of ten-minute plays, from Athena Theatre at Symphony Space, gives us 11 plays that succeed to various degrees. The scripts, which are mostly mediocre, are well served by some good acting. Of the 11 plays, seven use non-realistic techniques to deal with the challenges of this form. Of the remaining four, only one has a through line.

Only two of the 11 plays are really successful; they present the best scripts and they enjoy the best acting. boys don’t look at boys [no capitals in the title], by Jeremy O’Brian, presents a high school student who earns the attention of his teacher through a monologue. The speech in question is delivered by a terrific actor, Freddie Jay Fulton. He has a fluid emotional life and an expressive physical life. He creates a complex and subtle character in this one monologue and gives it a structure. It’s a really good performance, but Mr. Fulton’s work is devitalized by his director, who’s directed him to face the audience although he clearly wants something from the other character.

The other successful script is A Departure by Grant MacDermott. In this play a woman is about to leave town for a week and she exhorts her husband to keep busy while she’s gone. Straightforward so far, and without development. But then the woman addresses the audience in a monologue about her closeted husband’s gay life. She talks to us as if she were talking to him. “If you told me the truth I would leave you,” she says. The wonderful actress is Anna Holbrook; she gives a reserved and expressive performance, passionate without being demonstrative.

The surrealistic techniques that most of the playwrights are simply facile. However, some are intriguing. Help Who’s Next, by Kathryn Funkhauser, repeats its core scene with minor variations. Finally Ms. Funkhauser deconstructs her own script and reassigns lines to actors other than the first to speak them. They do this while addressing us. Interesting ideas that we’d like to see developed.

Otherwise, the scripts unsuccessfully employ a ghost, an object personification, deus ex machina, vulgarity, et al. The director of for all the plays, Veronica Dang, robs them of intimacy by telling actors to face front, as I’ve said, but otherwise keeps us engrossed by keeping things moving neither too quickly nor too slowly. Someone is credited with scenic design, but she doesn’t seem to have put much effort into it.

Perhaps future playwrights will look at our microdrama as a bold experiment. At any rate, they contribute to the diversity of our theater.