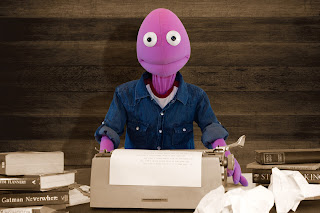 Randy is a purple hand puppet who gives an 80-minute monologue from behind a table on stage, speaking educated strine. It’s a stand-up comedy act called randy writes a novel. The premise is that he’s going to read to us from the first draft of his novel. He’s reluctant to read, and by way of diversion he flies off on comic tangents.

The program credits the actor playing Randy as Randy, but between us the comedian’s name is Heath McIvor. Presenting himself through a felt puppet puts a whole new complexion on his comedy. We feel superior to a bug-eyed puppet, but through great puppetry we accept Randy as a character. He leans over the table, throws his head back on his scrawny neck, and throws his arms around (on control sticks). Through a varied vocal life, Mr. McIvor creates a complex personality, frustrated, angry, sly. He insults his audience without being offensive, and he’s common without being cheap. We allow ourselves to laugh at a puppet when he tries to turn a page with his clumsy puppet hand.

This is really smart stand-up. Randy references Ernest Hemingway (did you know he was a KGB spy?), Harper Lee (and the controversial publication of Go Set a Watchman) and greenhouse gasses (as they relate to veganism).

At his best, he’s inspired. We’re all “bubbling away in an evolutionary cul-de-sac,” he tells us in a mixed metaphor. And after a run of jokes only mildly successful (all stand-ups have unsuccessful runs), Randy says “I’m having a wonderful time. Feel free to join me.” Like all monologists, he’s at his best when he’s present in the room.

The script needs to stay closer too its premise, and, as with all stand-up, some of the vulgarity goes too far (I don’t know why stand-ups feel compelled to do this). But randy writes a novel is really funny, an Aussie import much appreciated.