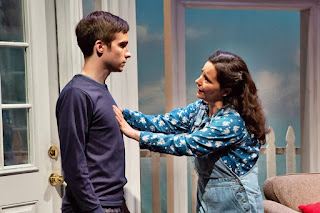 Ben Josephson ’s play The Property, presented by New Light Theater Project at The Clurman Theatre at Theatre Row, centers around a weak-willed woman, Irene, whose tenant - he’s renting the cottage - offers an enticing alternative to her nerdy husband, Eddie. Her self-absorbed high-school son, Todd, is no comfort to her, and her overbearing ex-husband, Vernon - he’s returned after 16 years - is a liability.
The play is essentially plotless. The relationships and the lack of overt action suggest Uncle Vanya, but Chekhov’s characters are actually doing things beneath the stasis, and they’re steeped in the activities of daily life. Mr. Josephson’s characters do nothing but talk, mostly about themselves. The play’s divided into three acts, each of about a half-hour. Greg and Vernon show up in Act One, and it’s a long stretch until the next piece of action, in Act II.
There is, at least, some interesting characterization in the dialogue. “You, mother, are a mess and you’re making a mess of me,” Todd says, revealing a self-awareness we don’t expect from him. And when he calls his step-dad “a lunky-headed, tiresome fool,” he himself seems shocked at what he’s said, and we see him mature in an instant.
The production is saved by its excellent cast. Rachel Botchan is so endearing as the unassuming Irene that we like her immediately, and Phil Gallen gives an insightful performance as Todd. The actor playing Vernon, however, is all bluster, and his long, unstructured speech is tiresome. The role is written without contractions, at odds with the buffoonery of the character.
A skin-head young man named J.J. appears in the last act, and Matthew ZanFanga is terrific in the role, which is essentially a monologue (Eddie is too drunk to talk to the young man). He exits without leaving a trace of himself on the play, and we’re disappointed that Mr. ZanFanga hasn’t been given more to do.
Robert Kalfin, likewise helps us through the play’s inertia with sensitive direction. He does something strange and intriguing at the opening of the third act. Several months have passed, and Irene and Eddie seem to have adjusted to the disappointments of life with a sort of strained, forced happiness. This explains the insipid fantasy of happiness that is Caitlynn Barrett’s set. It’s simultaneously indoors and outdoors: the parlor furniture is backed by a suspiciously blue sky, with a gable floating gayly over it. A white tree adds surreal mystery.
The program tells us the playwright is a family physician, as if this odd note, suggesting Chekhov, were some sort of defense. The Property succeeds in spite of the script, and New Light has done a nice job with it.
review
Steve Capra
June 2018