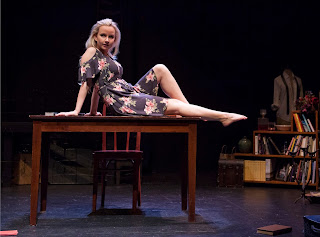 The Scandinavian American Theater Company is presenting a solo play by Lisa Langseth called Beloved at The Lion Theatre at Theatre Row. The actress, Elinor DiLorenzo, presents us with Katerina, a rather common young woman who gets scooped up by a high-class orchestra conductor named Adam after she takes a job as a receptionist at the concert hall. She tells us about Mathias, the guy she used to live with, and the step-by-step development of her relationship with Adam that makes her leave him.

Katerina’s not well-educated to the arts, but she falls in love with classical music, particularly Mahler, and her seduction by Adam is just one element of this larger life transition she’s telling us about. Playwright and actress do a great job of showing us more of Katerina than she can see herself. She tells us repeatedly that she’s not stupid. Her monologue is not sprinkled but rather iced with obscenities (rather overly so). When she tells us the ultra-sophisticated artist has fallen for her, we see that she’s deluded. The technique is s a type of irony.

The play is very nicely directed by Charlotte Barslund, whose main accomplishment is to cast Ms. DiLorenzo and to get a strong performance out of an actress whose chief experience has been in stand-up. The show is well blocked and well paced. Katerina doesn’t reveal too much too soon. Indeed, it takes 45 minutes for us to learn her name. Unfortunately, Ms. Barslund inexplicably mixes classical and rock music in the sound overlay.

Katerina is a nervous young woman, to say the least. Ms. DiLorenzo speaks so quickly that we can scarcely keep up with her. What’s more, her voice, although soft, is harsh. Her speech is a dead giveaway that she’ll never achieve the sophistication she strives for. I was reminded of that passage in Madame Bovary in which Flaubert tells us that Emma has a peasant’s hands.

Katerina is in that class of fascinating characters who nearly achieve self-awareness - but not quite. Speaking of women, she dismissively says “They don’t want equality. They just want to be taken.”

The actress’ moment-to-moment life is emotionally grounded, with a smooth flow. We don’t like her much as pity her - and here, along with terror, is the Aristotelean catharsis in this modest play.

And then there’s the unexplained. Katerina’s packing. To go where? We never find out. Very nice.

The cluttered set has books, a awful white chair, a very nice sofa, a table with a chair, a floor mirror and a balcony above. Oddly, there’s an anomalous chandelier, although Katerina is living in her grandmother’s cottage.

The script is perceptive and articulate, critical of Katerina while letting us identify with her. But the playwright makes two serious errors. A critical plot event is so ridiculous as to be unbelievable. Moreover, there’s an intensely graphic description of the sex act. Pornography is not art.

Nonetheless. Beloved is well done and well received. A solo piece is difficult, and The Scandinavian American Theater Company’s portrait of a victim has mystery and depth.