The Hysteria of Dr. Faustus 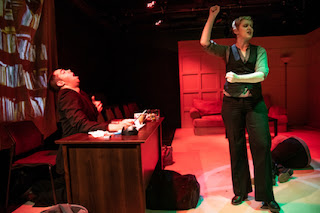 The Hysteria of Dr. Faustus, produced by The Seeing Place Theater at The Paradise Factory, is yet another turn on the Faustus myth. It’s written by Brandon Walker, who also plays the title role, and it’s directed by Erin Cronican, who also plays Wagner and Mephistopheles.

The play opens with the 80-year-old Heinrich Faustus addressing his Wittenberg class (us). He storms off after some inexplicable student heckling. When he’s at his home desk we meet his assistant, Wagner. Wagner is transformed into Mephistopheles and the good doctor makes his famous pact (he chooses the “highlight package”, for impatient people). After a quick trip to the bathroom to appreciate himself (and to let Mr. Walker remove his make-up), he’s transformed to age 30, which he will remain for 24 years. Heinrich Faustus becomes Henry Faust, English writer (although the actual, unfortunate progenitor of the myth was named Johann Faust).

The plot centers on Faust’s ruining a young girl, (Gretchen, of course). Her sister-in-law, oddly, is the fourth character.

There are real sparks of creativity in the script, as when Mephistopheles says “People are evil. I am only damned,” and when addressing God Himself, she says: “Humans are weak. So are you. So am I.” But the dialogue has several problems. Some of it is clichéd, as in the seduction, getting-to-know-you scene, and some of it, predictably, merely trivializes the myth, as when Faust calls Mephistopheles a “second-rate ghoul”. Cute but merely diminutive.

And the script is structurally amorphous. It dwells on the long seduction scene (Henry Faust succeeds with Mephistopheles’ help). And it skips some dramatic action altogether: we hear about an uncle and a niece who’ve died as a result of Faust’s actions, but we’ve never heard of them before. This technique is an interesting attempt at mystery, but it fails because we don’t believe the play.

What’s more, Gretchen’s sister-in-law finds herself in purgatory, and that’s just silly. And yet the script’s most thoughtful and original moment occurs when she’s freed because Faust apologizes to her.

For the most part, we don’t believe the acting either. Mr. Walker has some nice moments as the bashful suitor (Mephistopheles calls him “an 80-year-old virgin”). And there are moments of truth when he repents. But he hasn’t found the spine of the character, and when he tries to play an 80-year-old academic, he’s beyond his means, too loud and heavy-handed.

Erin Cronican is competent throughout, but she never makes much of the opportunity to play two characters in the same body.

We applaud The Seeing Place Theater at least for attempting to translate the myth into the terms of the 21st-century. Playwrights from Christopher Marlow to Václav Havel have adapted it, and we’re glad to see the tradition carried on.