The Resistable Rise of JR Brinkley 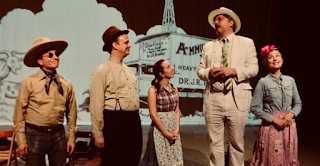 photo by Untitled Theater Company No. 61

JR Brinkley was a Kansas doctor - faux doctor, actually - in the 1920’s who gained fame with a cure for erectile dysfunction: implanting goat testicles in his patients. He was so celebrated that he ran for governor and won the popular vote, but his opponent won the election on a technicality, praise God (votes misspelling his name were discarded). He was ultimately exposed, discredited and convicted of the obvious crimes. An American success story indeed.

Edward Einhorn has based his play The Resistable Rise of JR Brinkley on this unlikely biography, and it’s been produced by The Untitled Theater Company No. 61 as part of FringeNYC. It’s a terrific production. Mr. Einhorn, who himself directs, employs a cast of five actors/musicians on a nearly bare stage with a backdrop. Included in the show are country songs - real country songs, bluegrass maybe - that Mr. Einhorn has revised from authentic tunes with new lyrics, making the show a ballad opera. Songs go through lifecycles and he’s extending the lives of these songs by adapting them.

The style is pure Brecht, as the title suggests. Indeed, Mr. Einhorn knows Brecht so well that that his techniques read like a living catalogue of The Berliner Ensemble: doubling the casting; songs; addressing the audience; changing costumes onstage; a facetious happy ending. And of course politics: Mr. Trump is never mentioned in the play - Mr. Einhorn is not crass - but the Narrator tells us “It’s no secret what it’s about.” In a campaign speech, Brinkley says “They’re trying to steal this election from me,” and “I’m very smart, believe me.” Commenting on the candidate’s xenophobic, populist rhetoric, one character says “Either they believe it or they just like someone who says it.”

It’s all impeccably executed. The acting is great, led by Trav SD as Brinkley. The actors work with varying degrees of parody. Mr. Einhorn has directed his gentlemen to act with reserve, and he’s probably wise not to let them run away with the play. But even when Brinkley is stumping, Trav SD is not allowed to let fly with lampoon, and we would like to see him have more fun with the role. He’s a vaudevillian; he knows how.

To attend a show at FringeNYC (The New York International Fringe Festival), the audience needs to meet at FringeHUB, which is a vacant lot in Greenwich Village, and walk to the venue led by staff. If you don’t want to wait in the cold, or if you can’t keep up with the group - c’est dommage!