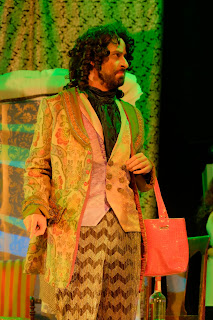 The theater of the absurd is alive and well, thank you. I don’t use the term in the loose sense, as applied randomly to nearly everything written after World War Two that’s not realism. I use it in the strict sense, le théâtre de dérision, in which nonsense is baked into the form of the play as a philosophy.

I’m speaking of Normandy Sherwood’s play Ruffles, or a Progression of Rakes, recently produced by and at The Tank. The substance of this terrific play, such as it is, concerns a vaguely 18th-century dandy (Florian, played by Ean Sheehy) who scoops up a stable boy and makes him a sort of servant-cum-psychoslave. The young person (played by Bear Speigel) is made to wear ruffles around his neck - hence his new name.

Sometimes the script sounds like Ionesco’s The Bald Soprano, and there’s an allusion to Genet’s The Maids when Florian has Ruffles engage in some role-playing with a row of silent maid-servants watching. The period is inconsistent - there are 20th-century allusions to plastic bags, phone numbers and roller coasters. And it’s never at all clear what’s going on in the plot. Yet at moments we get the impression that the idiot who wrote the script is smarter than we are. Ms. Normandy has Ruffles say things like “Am I finally able to hear the still voices of the world?” And in response to Ruffles’ song, a gentleman says “It’s almost as if he’s singing words that mean something.” Indeed, that’s how the whole play seems. Great!

But Florian, the antagonist, the libertine who corrupts Ruffles, has the best lines. “When I was a kid my parents made me sleep on the floor. I think it had a bad effect on me,” he tells us by way of introduction, and Ms. Sherwood summarily dismisses determinism. When he tells us “People enjoy my personality… even if it flies in the face of their so-called moral values,” we agree: much of the production’s success is owed to Ean Sheehy’s deft performance. He makes a complex, poetic line like “in the event my enemies sneak in under the cloak and cover of night” sound like an ad-lib.

Bear Speigel is less commanding as the androgynous Ruffles, but they (the performer) make a philosophical line like “What you think of as your thoughts are not your thoughts. they’re just thoughts” sound organic and spontaneous. Ruffles seems disappointed by his own enlightenment; he learns that when maid-servants are alone they talk about how to clean things.

The playwright herself directs, and she’s instructed her actors to speak allegro con brio, to great effect. The show whizzes by us and leaves us wondering what we’ve just seen. It runs just over a half-hour, and ends when Ruffles breaks off a speech in confusion, saying “I seem to have lost the thread.” Wonderful! Ruffles is that rare sort of play - one that we want more of.