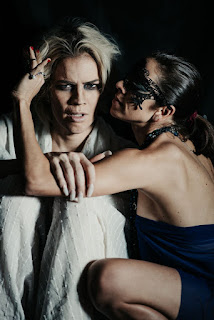 What a wonder Salome is! Oscar Wilde wrote it in French in 1891. His infamous crush, Lord Alfred Douglas, translated it into English, but Wilde was so dissatisfied with his work that, some critics tell us, he essentially translated it again. At any rate, the Lord Chamberlin suppressed the London production (which would have starred Sarah Bernhardt) and the play premiered in France.

It’s unabashedly hyperbolic, deliberately overwritten, as extravagant and overblown as dramatic prose can be. Wilde tells us everything six times. What style is this? It’s aestheticism - aka decadence. It represents the intersect of melodrama and exoticism. The script is as heavy as a fruitcake and great fun as well, and I don’t believe Wilde was entirely serious.

The reader will be familiar with the Biblical story: Herod tells his step-daughter, Salome, that if she’ll dance for him, he’ll give her anything she asks for. She dances the Dance of the Seven Veils, and asks for the head of Jokanaan - John the Baptist - whom Herod has imprisoned and who’s rebuffed her advances. After a prolonged, futile attempt at dissuading her, he grants her request - and orders the poor love-struck girl executed. Delicious!

M-34 Productions and FringeNYC, in association with The Irondale Center, are presenting the play at Irondale, in Brooklyn, with a cast of about 20. The bare stage has a circle about 20 feet across on the floor, and a half-circle, diameter down, on the back wall, which is draped with white plastic. We discover four actors lying languidly on the floor. Then The Young Syrian says “How beautiful is the Princess Salome!” and the first scene has a slow, ominous pace until the young princess enters.

This production is terrific, brilliant! James Rutherford directs with surety and conviction. He knows why Wilde wrote that way and he relishes every lavish image, while keeping his actors moving to counter the verbiage. His characters are in apotheoses of emotion. They’re not insane - they’re possessed.

The cast does justice to Wilde’s hysterical fantasy. Under Mr Rutherford’s direction they’ve mastered Wilde’s florid, impossible speeches. Laura Butler Rivera presents a Salome who appears normal at first, but who begins to show the unmistakable symptoms of demonic indwelling when Jokanaan rejects her. Her distraction propels her right through her infatuation - “I am in love with your mouth, Jokanaan” - to the ending of the show when she kisses the severed head (as in Beardsley’s famous drawing). As Herodias, wife of the Tetrarch Herod, Lisa Tharps is perfectly cast (good actors always seem perfectly cast), imposing and imperial.

Marty Keiser’s performance as Herod is bravura. This Herod is not quite sane to begin with, nervous and bipolar, almost comic. In his great speeches to Salome, when he offers her every splendor he possesses, itemizing them in tempting, breath-taking detail, Mr Keiser is faultless. When he tells Salome “I will give you anything I have” he pounds his chest, histrionic and believable.

Salome says to (the offstage) Jokanaan “All other men disgust me but you are beautiful.” And it was very clever of Mr. Rutherford to cast the androgynous Feathers Wise as John the Baptist (she is a trangender woman). Her androgyny gives us an entrée not to Jokanaan's psychology, but to Salome's. Unfortunately, Ms. Wise never succeeds in commanding her, as Jokanaan must. When the prophet tells Salome “Back!” he rejects her, but he doesn’t scorn her. Moreover, Mr. Rutherford errs in giving Ms. Wise' offstage voice distortion in amplification.

Most impressive is the ensemble work, all the actors in non-leading roles - particularly Alexander Reed, who welcomes us with the first line - giving fine, stylized performances.

The Dance of the Seven Veils is marvelous. The music, pre-recorded, begins in a sort of New Age vein, without a lead, and Ms. Rivera is as graceful as we could ask. But when the music takes on a beat she becomes wild, and she growls as she crawls. Mr. Rutherford projects her face on her large veil as she dances, and on the back wall, and we share Herod’s hallucination. Projections are used again later, less successfully, with a camera imbedded in the severed head of John the Baptist as Salome gazes at it.

Several minutes into the performance a sofa appears. The actors - slaves, of course - move it around, and the choice is totally organic to the concept. There’s no other set, but Lara de Brujin’s costumes are delightful - men wearing earrings and nail-polish - and they project their elegance on to the unseen palace.

One extraordinary element of the production is that Mr. Rutherford has written a new translation. Is this really necessary? I’m not a master of French idiom, but there are some interesting questions here. For example, Wilde wrote “Il ne faut pas trouver des symboles dans chaque chose qu’on voit.  Cela rend la vie impossible.” The line is elemental to the play, and Wilde translates it almost literally as “You must not find symbols in everything you see. It makes life impossible.” Mr. Rutherford translates it as “A life full of symbolism is unlivable,” which sentence lacks the poetry and the punch.

On the other hand, Wilde has Herod yell “Taisez-vous” several times, and translates it as “Be silent!” That English phrase reflects the grandeur of the play’s tone, but Mr. Rutherford’s translation - “Shut up!” - may be more true to the original. (At any rate, Mr. Keiser’s delivery is sumptuous. He’s in a frenzy.)

The tension mounts in this dizzying show as we see the inevitability of Herod’s and Salome’s fate. We experience, if not pity - the characters are too weird for that - certainly terror. Even the heat in the theater seemed to contribute to this Wildean hallucination. Congratulations to Mr. Rutherford and his company.

One more comment about the production: as my instructor in grad school used to say, “It’s enough to drive Oscar wild!”