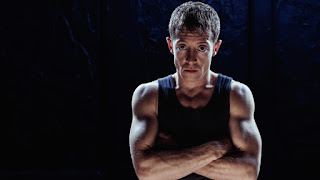 Swansong is an 80-minute monologue by Conor McDermottroe presented by L. Wolf Productions as part of the United Solo Theatre Festival. It’s a study of a criminal - a punk from the word go - presented with such insight that we leave the theater simultaneously appalled by the character and sympathetic to him. This is what it means to hold the mirror up to nature, non-judgmental and charitable.

Occi, as he is called, tells us about his life, starting with his habit of robbing the rich boys as a young hooligan. In the forefront of his bio is his mother, an alcoholic. “It wasn’t my fault she went back on it,” he tells us in one of the many glimpses we get of his inner life. We learn about his assaulting a civil servant and his ensuant psychiatric hospitalization, during which he was “awfully worried about Mammy.” After her death, Occi tells us “She’s with me all the time, in my sleep and all.” He takes work on a fishing trawler, on which he assaults his best mate for calling him an ugly name: “The whole world knows not to call me that,” he says.

Occi’s mother and the epithet he hates so much are central to the play, leaving him in a constant state of psychological crisis. And Mr. McDermottroe explores the depths of his spiritual poverty. In a chilling moment he tells us “I was havin’ awful dreams - worse than nightmares.”

The role is performed by Andre de Vanny as directed by Greg Carroll, and between the two of them they create a solo show of monumental emotional depth. With deft facility and expressiveness, Mr. de Vanny flows through a broad range of emotions:  shame, sadness, slyness, happiness…

And above all, anger. Occi’s anger is never below the surface for long. Mr. de Vanny is a slight man and when Occi’s anger surfaces he yells in such a booming voice that we can see that his anger is larger than he is. The actor is emotionally grounded in every moment of his performance. Still, there are ways to express anger besides yelling, and for all his range of emotion, he never seethes.

Late in the show Occi says “Help me someone! Help me!”, the director/actor team have the sense to underplay it, to great effect. They reserve the yelling for anger.

There are a few problems. Mr. de Vanny’s Irish dialect gets in the way when he rushes his lines. More importantly, Mr. Carroll inexplicably has his actor spend much of his time far downstage on this small black box theater, only a couple of feet from the front row, and we feel that he’s going to jump on us. And some indication indication of place as a set - Occi is feeding the swans in a park - would have been appreciated.

But no matter. Swansong is great, a testament to the potential of solo shows.