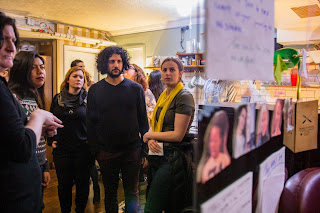 The Morality Machine is an immersive theater experience produced by Sinking Ship Creations in association with Acronym Presents and Wildrence at the space Wildrence near Canal Street. It’s an example of live-action role-play (LARP), a theatrical experience in which the audience participants fully. It’s very influenced by escape rooms and installations like Sleep No More, and it echoes what we called in the 1980’s “audience-activated theater”. There’s hardly any set text in the script, but Ryan Hart is credited for “Written Narrative”, and as far as I can see he’s the Prime Mover.

The premise is this: five years ago, five people died in a medical experiment at the site. Now the families and friends have assembled there to unseal the laboratory and explore the last days of the victims. We the audience are recruited to play the attendees, each of us assigned a character (I participated as the father of a young woman). We’re led into the small, cluttered lab/office where we find lockers, notes, photos, videos and an extremely strange machine with a bed in it, sort of like a rudimentary MRI scanner.

At first the production seems to be merely a sort of immersive Grand-Guignol, but it develops into something more rewarding. Several of my fellow participants in our group of 20 (20 people each night) were familiar with this sort of high concept installation - some were experienced with escape rooms. As a group we searched, watched, drew conclusions, found a couple of hidden keys - and finally someone got into the machine. To tell you more would be spoil this rewarding, and fun, experience.

It’s important that people understand the type of event this is before they attend. It’s a bellwether for 21st-century theater to come, theater that builds on the form’s greatest strength: the physical presence of the participants in the space.

The concept is terrific, and it’s meticulously executed. We hope that the company’s market will grow to include people less educated to the avant-garde. The company has told me that they’re prepared for participant groups less active than mine, but I’d nonetheless like to have seen more preparation and imposed structure. What’s more, there are alternative endings, and I found ours less satisfactory than the ones explained to me.

But The Morality Machine is brilliant. Congratulations to all involved!