A Man for All Seasons 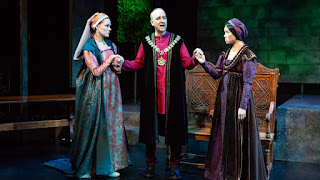 A Man for All Seasons is Robert Bolt’s play about Sir Thomas More, the Chancellor of England who stubbornly refused to approve of King Henry VIII’s decision to divorce his wife (first of eight), Katherine of Aragon, so that he could marry… um, which one was it… Anne Boleyn. He was summarily executed. The good King, of course, severed ties with The Mother Church - as Pope Clement VII refused to grant him the divorce - and established The Church of England.

Bolt has made Thomas a modest hero, a hero for modern times. He is a far reach from St. Joan, who said at her trial “Take care what you do, for in truth I am sent by God, and you put yourself in grave danger.” No, Saint Thomas More (he was eventually canonized) keeps his opinions to himself. He tries to avoid the King’s wrath through obsequience - “I am sick to think how much I must displease your grace” - and silence - “Silence is not denial and for my silence I am punished with imprisonment.” Still, discretion does him no good, and he was beheaded in 1535.

If Thomas lacks Joan’s sense of mission, he is in another way ego-centered: “What matters to me is not whether it’s true or not but whether I believe it.” The play is lean, with no sub-plots, no concern with anything but the fate that drives Thomas to his death.

One of my favorite theater companies, Fellowship for Performing Arts, is producing the play, directed by Christa Scott-Reed. Its lead actor, Michael Countryman, has the perfect air of resignation throughout; his worried, bland face convinces us that he knows, despite his denial, that there’s no escape.

The actors are all very good, precise and commanding. However. Ms. Scott-Reed directs them, Thomas and his daughter aside, to yell - no, to bark - virtually every line, and the performance lacks subtlety. This is a hyper-masculine, aggressive interpretation. Even Thomas’ wife is played as a braying harridan. One might think that Thomas would welcome the headsman just to be quit of her. Ms. Scott-Reed is stressing conflict, but the price she pays is huge.

There is precisely one delicate moment, the silence when Thomas’ wife leaves him for the last time, in prison, knowing she won’t see him again. It is very welcome. When the King’s chief minister decides to allow her to visit him in prison so that they’ll persuade him to yield, he says “We have to find a gentler way.” Quite true.

Still, I’m looking forward to more from Fellowship for Performing Arts. They produce theater from a genuine Christian worldview. It is very welcome.