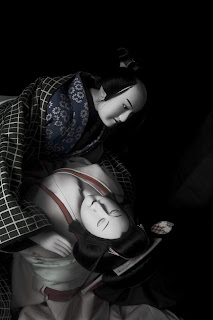 
Bunraku puppetry, a traditional Japanese form, established itself in the 17th  century. Its three elements are the familiar large puppets, narrators (or chanters), and shamisen musicians (the shamisen is a three-stringed instrument resembling a guitar). The proper name for the form is ningyō jōruri (bunraku is a 19th-century name). Jōruri refers to the narrative chanting in the play and ningyō means puppet.

The master playwright of the bunraku was Chikamatsu Monzaemon. In the early 18th century he introduced believable characters to Japanese puppetry who dealt with the real-world situations that his audience faced: the conflict between feudal tradition and human nature.

Chikamatsu (as he is known) produced The Love Suicides at Sonezaki in 1703. The play recounts the story of 25-year-old Tokubei and his 19-year-old lady friend Ohatsu (who happens to be a courtesan). Like Romeo and Juliet, they can’t be together, so they kill themselves at Sonezaki.

New York’s Lincoln Center is producing this puppet play as part of its White Light Festival in association with The Japan Foundation and Odawara Art Foundation, under the title Sugimoto Nunraku Sonezaki Shinju.

Each nearly human-sized Bunraku puppet is puppetted by two or three puppeteers. The gorgeous puppets would have been three or four feet tall had they been stood up, but they were usually held by the puppeteers in such a way that they were nearly sitting on the arm of one of them. The puppeteers, of course, wear black, with black hoods. One puppeteer whose job is a sort of stage maintenance - removing materials the characters drop on the ground - scampers in such a way that his knees are never straight and his thighs are often horizontal. A bunraku puppeteer’s training can take decades.

Bunraku puppets are delicate and complex. There are no bodies attached to the beautiful, pale faces, only kimono. One puppeteer manipulates the left arm, another the right, and a third manages the lower body.

The three scenes of Love Suicides at Sonezaki are preceded by a musical prologue - two shamisen stage left, with flute and bells off-stage. The chanting begins with “Hear this truth,” and we know that this is a myth. In the first scene, which uses a single shamisen and a narrator next to him, we meet the lovers and the villain who cheats Tokubei.

After the intermission, the second scene involves complications of the plot, again with a shamisen and a narrator. The final presents the suicides - three shamisen are used, as well as three narrators, sometimes chanting as a chorus.

There’s little set in the first scene, but the second and third have expressionist indications of place. Aside from the set pieces, the stage is black except for two pints when there are projections on the back wall.The first is an abstract, kinetic modernist design suggesting computer graphics, and this is the single choice that I disliked; it conflicted with the tone of the puppetry. The second projection showed the lovely trees, out-of-focus, in Tenjin Woods, on the road to Sonezaki.

The chanted jōruri (Japanese, with English surtitles) is a combination of third-person narrative and dramatic dialogue, with no differentiation in style between them. Some of the poetry is lovely: “rapeseed wearied by the dew”; “The zephyrs of love are inescapable” “Painful indeed is reality’s darkness”. The chanting sounds closer to throat singing than to Western singing.

Aside from the principles, the cast of characters includes puppet prostitutes, puppet thugs, and a naked servant. The movement ranges from the thugs’ drunken staggering to the furtive creep of Ohatsu as she goes to meet Tokubei. Interestingly, this known prostitute is worried that people will learn she has a lover: “There are enough rumors about you,” the other women say.

The puppets in Love Suicides are at their best when they rush into one another’s arms, or when Ohatsu, creeping to meet Tokubei, turns her head to be sure that no one see her. Simple, clean, clear gestures.

And their suicide is heart-wrenching. Chikamatsu has them cut Ohatsu’s sash so that Tokubei can tie her hands, and the puppets really do this with their small, delicate hands. Their lifeless bodies crumple on one another. There’s a prolonged whistle, alarming and mournful, for most of the scene.

The production is directed by under the direction of Seiji Tsurusawa, and his direction is impeccable - meticulous, never rushed, never dwelling. The chanting, while alien to our Western ears, is mesmerizing. Classical Japanese music suggests the sounds of nature, and the show’s haunting shamisen music was composed by Seiji Tsurusawa. The entire company numbered about 25.

Frankly, it took me a while to become absorbed in the puppets. For one thing, I was fascinated by the chanting and the still tableau of the shamisen in their elaborate costumes. Moreover, the first half of the first scene is exposition, giving the puppets little to do.

By the second scene I scene believed the reality of these puppet characters. And in the suicide scene I was totally absorbed. The scene is long and poetic. She is in a lovely white kimono; he is in a pattern. There are torches on the road to Sonezaki, eerie on the black stage - and our lovers know they’re spirits. They speak of their parents, and Tokubei wants to ensure that they both “look beautiful in the end”. “Kill me! Kill me now!” she cries. What 18th-century European puppet had this sort of pathos or psychology?

What brilliant work this is! The Love Suicides at Sonezaki is one of the foremost American puppetry events of the year. Many thanks to Lincoln Center and Hiroshi Sugimoto, Artistic Director of The Odawara Art Foundation, for presenting it!