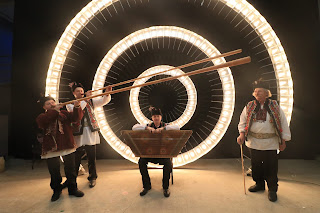 Koliada is a solstice ritual from Eastern Europe that predates Christianity in some aprts. Koliadnyky is a Ukrainian vocal group that sings Koliada songs. The group has teamed up with The Yara Arts Group to present for one performance the show Winter Songs on Mars at La MaMa.

The text is adapted from a 1780 puppet show, a nativity play called Vertep, and it’s fused with traditional Koliada songs. It’s all put into a clever context of Martians discovering their ancestors were Ukrainian - it’s silly but it gives the play a nice frame.

Of course, those ancestors show up - with drums, vibes, piano, a bass, a cello, more drums, and specially tuned fiddles. The traditional instruments are a trambita (a “mountain horn”), the duda (bagpipes made from a goat), drymby (jaw harps) and a tylynka (an “overtone flute”). And there’s a large hammer dulcimer - at one point the musician turns it over and raps on the wooden back.

The grand, full-bodied singing is largely from men and almost always in unison. At one point there’s an interesting call-and-response passage.

The play is the tory of The Holy Innocents, and it’s inventively presented. In one scene Herod speaks Ukrainian but his sooth-sayer speaks English. We don’t need to understand Herod because we know what he’s saying, and the technique gives an interesting distancing effect.

This wonderful show is created and directed by Virlana Tkacz, Yara’s Artisti Director. The costumes are designed by Keiko Obremski - she’s created a gorgeous gown for Alida, the rightful queen of Mars.

The whole event is joyous, life-affirming. When the chorus sings “Ring the bells” the assembly does so. And the announcement “Awake and fear not for great joy is upon us!” - well, Winter Songs on Mars is great! Thank you, Yara and Koliadnyky!

photo: WMI The pipa ( pee -pah) is an ancient Chinese instrument similar to a lute, with four strings, played almost vertically. Pear-shaped, it has four tuning pegs and about 30 frets, and modern ones have a small sound hole under the bridge. Its sound is haunting, like the sound of nature. Its origins are debated, but it evolved as a combination of many instruments, the earliest a hand mallet drum to which animal gut strings were added. We first hear of it in documents of the Eastern Han Dynasty (25 to 220 AD). Its master, Ruan Xian, lived in the fifth century. It was most important in the Tang Dynasty (618 to 907) and repopularized in the Middle Ages, during the Ming Dynasty.  And it’s still played today - most notably in the hands of Zhou Yi, who’s been winning awards since childhood for her virtuosity. On November 20 she gave a marvelous concert at The China Institute in New York, Discover the Pipa , produced by The World Music Institute. Her first piece was sim
Read more