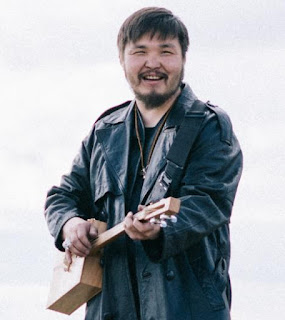 On January tenth The Rubin Museum of Art (which presents art of the Himalayan regions), New York, presented an extraordinary concert called Sounds of Siberia. Two performers, Yuliyana Krivoshapkina and Nachyn Choreve, demonstrated the throat singing of the Tuva, a republic within The Russian Federation bordering on Mongolia. They accompanied themselves on two instruments: Ms. Krivoshapkina played the khomus (a type of jaw harp) and both she and Mr. Choreve played a string instrument which I believe was a balalaika, with three strings.

Ms. Krivoshapkina sang the opening song in vocalese - that is, without words, with only a vowel sound. She accompanied herself with elegant arm gestures suggesting flying. It was a marvelous choice to open the concert.

This was followed by a song in which Ms. Krivoshapkina sang words, presumably Tuvan. Mr. Choreve introduced his first balalaika, which had a boat-shaped body. He would later switch to one with a rectangular body. Sometimes he bowed the instrument, and this was particularly interesting when he was singing those prolonged vowel sounds of throat singing. At other times he plucked or picked.

In the third song Mr. Choreve introduced an extraordinary technique in which he sang in the throat-singing style and simultaneously whistled. The effect is so unlikely that I wondered if the whistling was superimposed on the sound system. But no - both the singing and the whistling were functions of his breath phrases.

In a later song Ms. Krivoshapkina played the khomus. Holding the instrument up to her mouth with the left hand, she made lovely, extravagant gestures with her right arm as she stroked the reed with her right hand. On another song she played the khomus while making the sounds of birds, including shrieking like a barred owl. In another song, She imitated the sound of the wind. Absolutely marvelous!

Later, both played the balalaika and sang a duet, including a passage of call-response. In another song, they sang in unison. Only a few of the few songs were introduced, but Mr. Choreve introduced a particularly beautiful song calling it a lament. It expressed the universality of grief.

The three general styles of Tuvan throat singing are khoomei, kargyraa and sygyt. The singers did not tell us which style they were singing, but Mr. Choreve did introduce one song as being of a particular type, (I didn’t catch specifically what he said). This was the throat singing that I was familiar with, very gruff and a bit hard to listen to.

One of the most interesting things about this singing is that the singers sometimes sang words but prolonged the vowels for so long that it sounded like vocalese. They even prolonged the vowels between breath phrases. Many songs ended with a humorous button, like a horse’s neigh. One was sung so staccato that it sounded like a Gilbert and Sullivan patter song. During their encore, Ms. Krivoshapkina invited the audience to join in the response of a call-response song - and we happily did.

Ms. Krivoshapkina wore a gorgeous, elaborate, layered blue-green and gold dress with white fur trim and a wide skirt. Mr. Choreve was in a russet robe.

There were two drawbacks to the concert. One was that the amplification was so loud and the echo so high that it distorted the sound. The second was that The Rubin gave us not a word of explanation about the songs - not even a program.

Still, the Rubin is to be congratulated in bringing Sounds of Siberia to New York - a rare, superb concert. It was a wonderful evening!