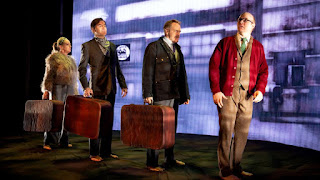 C.S. Lewis wrote The Great Divorce, a novel, in 1945. The title derives from William Blake’s 1793 poem The Marriage of Heaven and Hell. It presents us with a set of travelers who take a bus from Hell to the outskirts of heaven and are offered the opportunity to enter heaven if they repent - that is, acknowledge their error. Most of the travelers decline the offer, wedded to their tragic flaw.

Max McLean, Artistic Director of the OOB theater Fellowship for Performing Arts, adapted the novel into a play for his company several years ago and FPA recently presented it as an online event. Using green screen technology, the actors were videoed separately and these videos combined with background to form the finished piece. The technique worked quite well, given its obvious limitations.

FPA presents intelligent, inquiring theater from a Christian perspective, and they’re partial to C.S. Lewis, having presented a play about him and an adaptation of The Screwtape Letters.

The adaptation works nicely. The play opens with Lewis’ opening lines: “I seemed to be standing in a bus queue….” Four actors play all 20 roles. Joel Rainwater gives terrific work in the lead role of  the “Narrator”. The other actors, as well, are very good, Jonathan Hadley, Carol Halstead and Tom Souhrada dividing the other 19 roles among themselves. Christa Scott-Reed directs with surety, ably meeting the challenges of a technology in which only one actor appears in a frame.

Each traveler meets a spirit guide who offers them eternal happiness if they’ll abandon their tragic flaw. Each clings to is hamartia except for one who agrees to abandon his pet lizard for salvation. Critics of the novel interpret his sin as lust. I’m not familiar with the source material, but this play gives us no discernible hint as to what the lizard symbolizes. And in this day and age, does anyone really believe that lust sends us to hell?

Lewis’ range of concerns is wide and we recognize many parallels with other writers. “It’s scarcity that enables a society to exist,” for example, echoes Marx, while “They don’t want to end the so-called war; the whole game depends on keeping it going,” predates 1984 by four years.

But above all, when you dramatize The Great Divorce you end up with something very much like Don Juan in Hell, the dream sequence from Shaw’s play Man and Superman. In both works the characters engage in debate as they choose between heaven and hell. And the the two writers share the same concept of hell:

Shaw: “Heaven is the home of the masters of reality.”

Lewis: “Heaven is reality itself”.

They agree, as well, that “All who are in hell choose it.” Lewis even shares Shaw’s characteristic heartlessness when he tells us “Love, the way mortals understand the word, is not enough.”

Whether we agree with Lewis’ points or not, this is great, thought-provoking work from FPA.