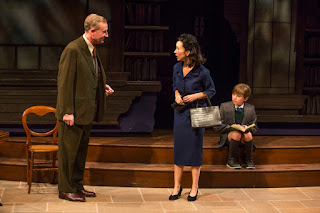 Fellowship for Performing Arts produces theater from a Christian perspective. It’s currently touring with a solo show about C.S. Lewis, C.S. Lewis on Stage: The Most Reluctant Convert. Here in New York they’re presenting another play about Lewis, Shadowlands, Off-Broadway. It’s a larger production, with a cast of ten. Like The Reluctant Convert, it explores theology through the prism of Lewis’ life.

Shadowlands begins Lewis’ story from just before he meets the poet Joy Davidman - that is, Mrs. Gresham, as she is more often called in the script. Later she becomes Mrs. C.S. Lewis, but only after she breaks down the barriers that Lewis has created to shield himself from the female other.

We meet Lewis among his hyper-intellectual mates in the male sanctuary of Oxford. Mrs. Gresham, an American with whom he has been corresponding, visits, returns to America, and then shows up again, now divorced, announcing that she’s moved to - of all places! - Oxford. Lewis finds in her a platonic friend, and much of the delight of the play comes from the entrees to romance that she offers him. But this highly repressed middle-aged man - who wears a suit and tie even under his dressing gown - is in strict denial.

It’s astonishingly fitting that Lewis and Mrs. Gresham have at first a marriage of convenience. He marries her so she’ll have UK residency, and they live for a while separately and chastely. Only after she’s diagnosed with terminal cancer does he come to his emotional senses, and they marry in earnest.

Playwright William Nicholson succeeds in weaving philosophy with romance. The play opens with Lewis addressing us: “Good evening. The subject of my talk tonight is love, pain and suffering…. If God loves us, why why does he allow us to suffer so much?”

The issue seems resolved late in the play when he says “The blows of His chisel which hurt us so much are what make us perfect.” But he later says of his wife’s dying “This is a mess and that’s all there is to it.” Only when he cries embracing her son, after her death, does he seem to begin the healing process of grief.

The first act is lively and dramatic. Unfortunately, there’s a second act, in which there’s hardly any conflict. The husband and wife have little to do except to talk about love and death. There’s not much Mr. Nicholson can do about this, as he can’t invent the story.

Christa Scott-Reed directs the show with surety and precision, never dwelling, never rushing. Shadowlands is essentially very Shavian, rich with philosophy and lustless romance, and she’s totally at home with the style.

Robin Abramson is terrific as Joy, vivacious and smiling. She crashes the male bastion of upper-crust English dialect with a brash New Yorkese - “So many people must write ya,” she says to him.

Joy Davidman is the Shavian woman, the life force pursuing the intellectual man. But Mr. Nicholson and Ms. Abramson make it clear that she’s also a first-class intellectual in her own right. When she calls Lewis an intellectual bully, he replies “That makes two of us.” And the couple enjoy an lovely, educated moment in Greece when they quote Lord Byron in duet - “the isles of Greece / Where burning Sappho loved and sung”.

Kelly James Tighe’s set is very handsome, with lots of dark wooden walls. There’s a large wardrobe up-center in some scenes, and Joy’s young son opens it to reveal visions of Narnia. It’s great fun, if bewildering to an audience not familiar with Lewis’ series of books The Chronicles of Narnia.

Mrs. Gresham was intensely disliked by Lewis’ peers. The playwright doesn’t make much of this circumstance, with just a moment of conversational skirmish between her and a don. And that’s too bad. A clash with Lewis’ circle might have livened up the second act.

But let’s not ask the show to be something it isn’t trying to be. Shadowlands is very good, another success for Fellowship for Performing Arts.